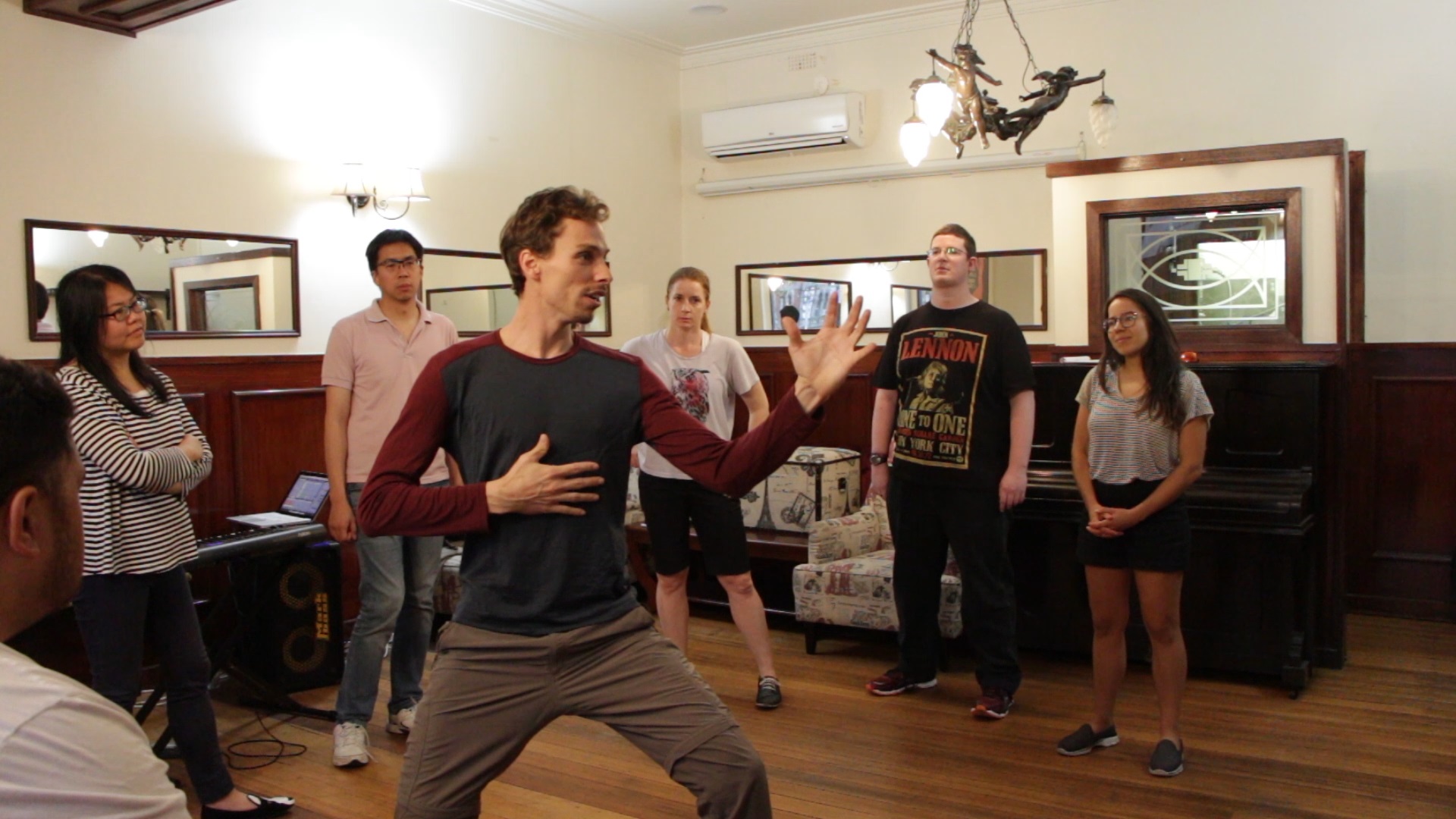 Why and How I Teach

I see teaching specific one-off workshops as a way to open doors to new universes. I want my workshops to be intense. I want them to shake things in the players’ minds, to give them new perspectives and toys to play with in their future trainings and shows. I focus on the things that matter to me while using my personal background to share on what I’m best at. That’s why the major three axis of my workshops are: sincerity, languages and music.

Following are some of the training programs I teach based on these topics. But as we are humans, and everyone is different, I feel it is really important to tailor the workshops to each single group. See this as a base and contact me for more specific programs tailored to your needs.

► Improv in Tongues: The Art of Telling a Story in a Language You Don’t Know

How can you improvise in a language you don’t fully understand?

Playing abroad or receiving foreign companies, we might experience the language barrier.

For most players, improvising is creating a story by talking. But what if you improvised in a language which is not your mother tongue? Or what if you’re playing with people who don’t understand you?

In this workshop, Sébastien will explore the unexploited benefits of not mastering the language in which you’re improvising. We’ll start with exploring silences and sounds, and then we’ll to move to perfectly understandable gibberish. Once we perfectly understand each other, we’ll play with misunderstandings that can happen when improvising in foreign languages.

► Foreign Characters in Improv: Explore the cliché, go beyond the cliché

Where’s the limit between caricature and accuracy when playing foreign characters?

It can be challenging, both technically and morally, to play a foreign character. How to explore our knowledge of a culture without entering the cliché or hurting people’s feeling?

Accents and clichés are the entrance hall of playing foreign characters. We’ll explore them and then deconstruct them.

In this workshop, Sébastien will explore the main nationalities played in improv, and extend it to the least often seen ones. You will focus on your strengths and practice on the characters you’re less confident with.

We will also play with turning the clichés around. Instead of a pasta-loving Italian and a Japanese judoka, why not having a Japanese seducer and an over-obedient Italian? Obviously, while still respecting accents, body language, and cultural references!

To take the audience into a genuine musical journey, let’s explore the power of collective singing.

When you sing your lines in improv, you’re telling the story. When you’re singing in a group, you’re adding layers and depths. You set the foundations of even more solid musical stories, using the power of the group.

In this workshop, Sébastien will focus on the three C of polyphonic singing: Chorus, Choir, and Counterpoint. Chorus creates a meeting point and anchors the song, for both actors and audience. Choir gives an exciting feeling of connection among the improvisers. Counterpoint allows improvisers to reach more melodic diversity while playing with contrasts in the stories.

Progressively, we will reach the complexity of rehearsed musicals, while keeping the authenticity of improv.

The workshop is designed for improvisers who have experience in musical improv and want to broaden their improv singing skills. However, the workshop is open to anyone who thinks they can benefit from it.

What if instead of thinking the future of the scene, we would just let our emotions lead the improv?

In this workshop, Sébastien will help you to explore your emotions. By reacting to the present moment, we will see how we can use emotions to tell the story. We will practice silences and looks to give more depth to the scenes. We will also use emotions to create the characters and establish the relation between them.

Improvising using your emotions can allow you to create more realistic stories. Your acting becomes more subtle, the characters more intense and their relationship more powerful. If you feel it, the audience will feel it too.

The workshop is designed for experienced improvisers who want to take their acting further, especially in exploring longer forms. However, the workshop is open to anyone who thinks they can benefit from it.

► Give your 110%: Focus and Commitment throughout the Scenes

The scene starts before you enter the stage, it ends after the lights turn off.

When we improvise, too many things go through our minds. The risk of breaking out of the scene is huge.

A whisky glass, a pirate outfit, a spaceship… The audience’s imagination actually sees the scene the actors create. Be it laughing to a partner’s joke, walking through a table, wondering what to do next… They all have the same consequence: it takes the audience out of the story for a split second. We then see actors instead of characters. Their imagination has to create everything, once again.

In this workshop, Sébastien will focus on the mindset and tools to always remain focused. You will be able to take your audience further, where the actors disappear, to create stories full of characters.

Give the audience a chance to see only characters, without ever seeing improvisers.
Key skills: remaining focused, attention to details, unshakeable commitment
Download full program here
Contact Me